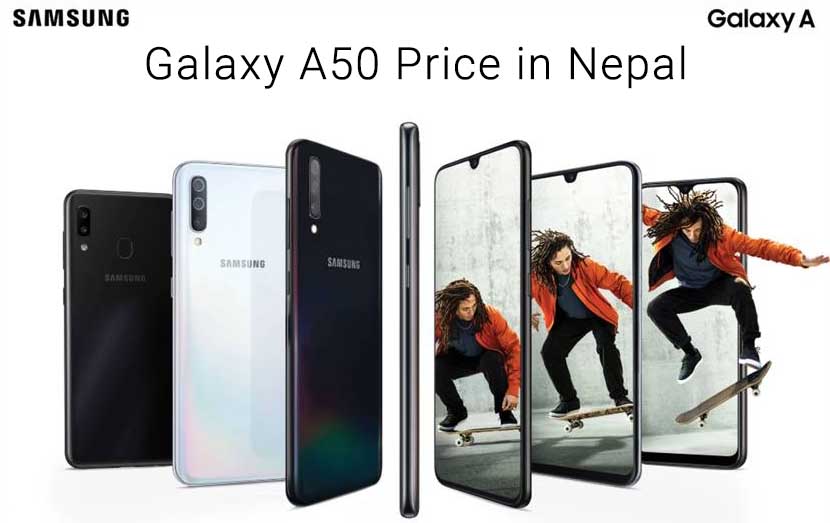 The new Galaxy A50 comes with a Super AMOLED display panel. The handset has a battery of 4,000 mAh with fast charging support. It runs on the Samsung One UI based on Android Pie out of the box. There is a triple camera at the back with 25-megapixel primary shooter. Let’s find out the price of Galaxy A50 along with its specifications here in Nepal.

The most important feature of the Samsung Galaxy A50 is the 6.4-inch Super AMOLED screen with full HD+ resolution. Samsung has done a good job of trimming the existing boards at the edges of the screen. The curved edges are in keeping with the current trend. Looking at the price, it seems to be a very slick handset.

The Galaxy A50 comes with an in-display fingerprint sensor. Sadly, the company has not provided an ultrasonic sensor in it, which is part of the flagship Galaxy S20, 20+, and Galaxy S20 Ultra. Samsung has used glastic material for the back panel which Samsung says to be the combination of glass and plastic. But it gives the feeling of being plastic or polycarbonate.

Galaxy A50 runs on the octa-core Samsung Exynos 9610 processor which is more powerful than Exynos 7904. Two variants of Galaxy A50 have been launched and the difference between these two variants is just a RAM. The base variant comes with 4 GB RAM and the other has 6 GB. But the storage of both variants is 64 GB only. It seems a bit shocking that because there is also a 128 GB storage variant of the cheap Galaxy M30 handset.

Galaxy A50 runs on the new One UI based on Android 9. The phone is set to get an Android 10.0 update with OneUI 2.0. One UI is much better in terms of design and seems modern. Samsung says that it has taken care of the usability of the large screen of the phone. But in the course of doing this, the company has reduced the information density. For this reason, text and icons everywhere have become very large.

The in-display fingerprint sensor catches the attention of many people. But it also has some drawbacks. It detects slow. Sometimes the phone takes two seconds or more to unlock. This delay will disappoint you. If you wish, you can also unlock the phone in standby mode. But only after trial and error, you will know where to keep the finger. It also has face recognition which works faster at times.

We never realized any lag or slowdown in common usage. We used the 4 GB RAM variant and we are happy with it. We played PUBG Mobile and Asphalt 9: Legends in the phone in high settings and we were not disappointed.

Samsung Galaxy A50 is also known for the camera feature. It has a triple camera setup on the back. The primary sensor is 25 megapixels and the secondary camera is for wide-angle shots. It is an 8-megapixel sensor, with a 123-degree field of view. The third sensor is a 5-megapixel depth sensor. A 25-megapixel sensor with f/2.0 aperture has added on the front panel for the selfies.

Samsung has introduced camera features such as live focus mode, 480fps, 720 pixels slow-motion video mode, a hyper-lapse mode for timelapse videos, AR emojis, pro mode, and intelligent scene optimization in portraits. You can switch between standard and wide-angle cameras before starting a video shoot. It is not possible to do this in between video recordings.

With the front and rear camera setup, you will be able to record full-HD+ resolution video. You will also be able to change the background blur in portrait shots. You have options like Standard Bokeh, Assorted Filter Effects, and Dolly Zoom Effect. The edge detection was excellent.

We were satisfied with the pictures taken with the Galaxy A50 camera. In the light of day, there were complaints of overexposure and burnout in the brightly lit part of the frame. There was a lack of detail at night. But overall the photos turned out well, with plenty of detail. A wide-angle camera gives you a lot of flexibility. You will be shocked to see how much of a wide-angle lens can fit in one frame from one place. But the quality decreases and distortion is also seen.

Samsung has added 4000 mAh battery as the way to revive the handset. In normal use, the battery will easily support for about one and a half days. From the beginning of the day, we shot photos and videos, streamed the cinema, played games for a while, and also did web browsing. After this, about 30 percent battery was left in the night. In our HD video loop test, the battery died in 14 hours 59 minutes, which would be considered excellent. The charger in the retail box charges the battery from zero to 11 percent in about 10 minutes. And 30 percent in 30 minutes. Samsung’s latest Galaxy M31, Galaxy M21 comes with 6000mAh battery which might be great for big battery phone lovers.

Connectivity options of the phone include Bluetooth, Wi-Fi, FM radio, and LTE and VoLTE support.

Galaxy A50 Price in Nepal and Availability

Sadly, the Galaxy A50, priced at a starting price of Rs 26,6990, is pitted against Xiaomi’s Poco F1, which comes with a Qualcomm Snapdragon 845 processor. If you like gaming or want a more smooth experience, then Xiaomi’s Poco F1 is a better option. But it does not have three rear cameras and is not equipped with an all-screen design.

Even though Samsung has adopted an aggressive strategy with this phone. But Xiaomi Redmi Note 7 Pro is one step ahead of this. It comes with Qualcomm Snapdragon 675 processor, 48-megapixel primary camera, Gorilla Glass 5, and other powerful specifications. The starting price of Redmi Note 7 Pro is Rs 23,999 and its expensive variant is Rs 25,999 (with 128 GB storage).

We think the Galaxy A50 will attract many people. It has all the features that are in trend these days. And there is no major drawback. We feel that there is still room for improvement in camera and software. But Samsung has made it clear that it is ready to challenge.

If you are looking for similar or newer phones in this price range, Honor 8X, Realme 6 Pro, newly launched Redmi Note 9 and even Redmi Note 8 can be a good option.