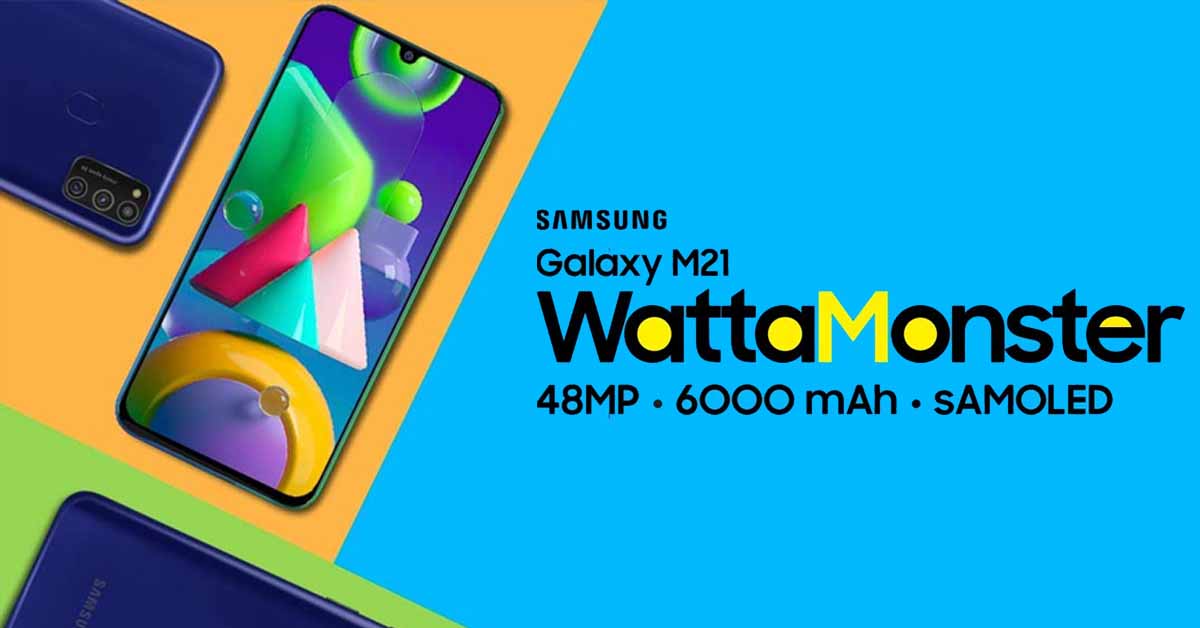 Samsung’s Galaxy M series is launched in Nepal to compete with Chinese manufacturers such as Xiaomi and Realme. After Xiaomi got to the Number 1 position in Nepal, Samsung has introduced two new phones at the same time - Galaxy M21 and Galaxy M31. Thanks for the aggressive pricing compared to Samsung’s other phones available in Nepal. This new smartphone shares a lot of hardware with Galaxy M31 and the only difference among them is the camera. Nevertheless, it does come with a much more affordable price tag. The phone was launched in India on March 18, 2020, with the price of INR. 13,999 for 4/64GB variant and INR. 15,999 for a 6/128GB variant. The price of Galaxy M21 in Nepal is Rs. 22,999 for the 4/128GB model and Rs. 27,499 for 6/128GB variant.

The new Galaxy M21 is a battery focused smartphone that is available in Nepal at the killer price. Samsung launched this phone soon after Xiaomi launched Redmi Note 9 Pro. The phone has a triple camera at the back with a 48MP primary lens and has a 20MP selfie shooter. The Galaxy M21 also comes with One UI 2.0 with Android 10 out of the box. Let’s find out the price of Galaxy M21 along with its specifications here in Nepal.

All the phones in the Galaxy M series are made up of plastic build to make the pricing competitive. Looking at the phone, we can be sure that Samsung has done hard work to keep the price as low as possible. Talking about the design, the back panel has plastic with a glossy finish. Designwise the phone looks much similar to last year’s Galaxy M30s.

Galaxy M21 flaunts big display that measures 6.4’’ and has thin bezels at the top and the sides with a considerably thicker chin. The display at the top houses a tiny selfie camera and an earpiece at the front. Samsung has used display with 2340x1080 resolution Super AMOLED panel.

Under the hood, the is powered by a 2.3GHz Exynos 9611 octa-core chipset manufactured using a 10nm FinFet process. For the graphics part, there is a Mali G72 MP3 GPU which is coupled with 4 and 6GB of RAM and 64 and 128GB of storage. This exact SoC is found on multiple Samsung mid-range devices - Galaxy M31, Galaxy M30s, Galaxy A50s, and Galaxy A51 to name a few.

The phone runs One UI 2.0 on top of Android 10 which is the newest version of Android. This phone gets an Always-on display mode, and Dolby Atmos is ready for earphones and Bluetooth headsets.

The camera system on the M21 is roughly the same as that of the Galaxy but with misses the macro lens. There’s a triple camera setup on the phone with a primary snapper of 48MP. The other two lenses are - 8MP ultra-wide lens and a 5MP depth sensor. As the Galaxy M21 uses pixel binning, the usual photos are of 12MP resolution. For the selfie, you have a 20MP front-facing shooter at the tiny U shaped notch.

For the videos, you can shoot 4K resolution videos at 30fps. The 1080p can go up to 60fps and has a super steady mode which will give you respectably smooth footage.

The Galaxy M21 packs a massive monstrous 6,000 mAh battery which can last for almost two days in a single charge when you use the phone moderately. For the charging, the phone has the same old 15W so-called fast charger which takes 1 hour just to charge 40% of the battery.

For the connectivity, the phone Dual-SIM option with 4G support on both SIMs, Bluetooth 5.0, and has a USB-C port at the bottom for file transfer and charging.

If you are looking for similar or better phones in this price range, Realme 6 Pro, newly launched Mi Note 10 Lite can be a good option. Don’t forget to check the latest price list of Samsung phones in Nepal as well.