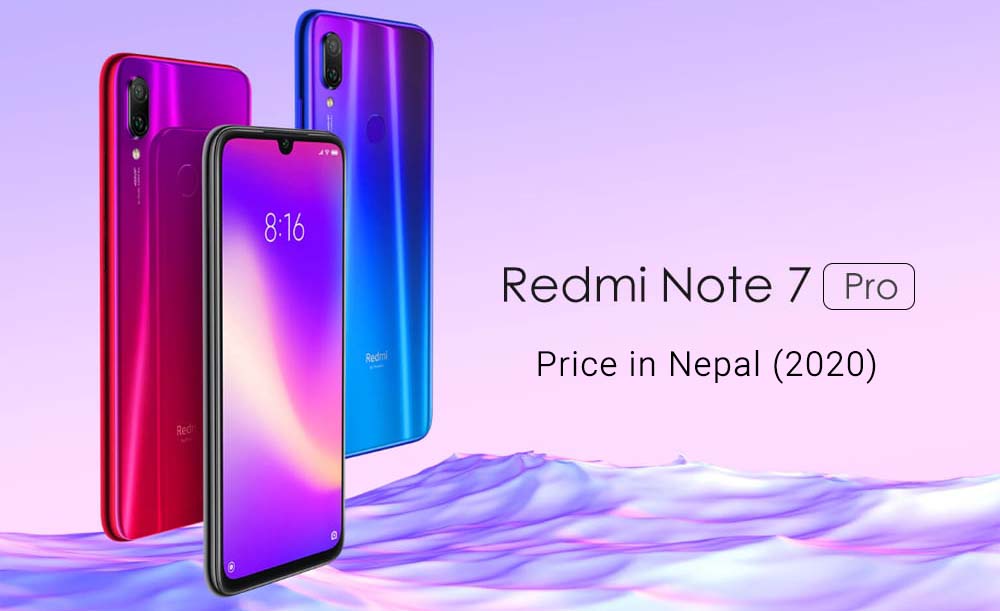 The Pro variant is an upgrade from the company’s own Redmi Note 7 in many ways. It comes with a better processor, more storage, and a better camera. Redmi Note 7 Pro is one of the best phones in Nepal under 30,000.

Redmi Note 7 Pro is a stunning looking smartphone from Xiaomi in the mid-range segment. The phone comes with an “Aura Design” just like the Redmi Note 7 that looks attractive at the first look. There is a glass on both sides which makes it look even more premium. The phone houses a dual camera along with a fingerprint scanner at the back.

The phone has a 6.3-inch full-HD+ screen, with 19.5: 9 aspect ratios and waterdrop notch. Xiaomi has used 2.5D Curved Gorilla Glass 5 on the front and back panels of the phone.

The smartphone is powered by a Qualcomm octa-core Snapdragon 675 processor based on the 11 nm process. This is one of the powerful mid-range chipset available right now. There are three options for phones based on RAM and storage - 64 GB storage with 4 GB RAM, 64GB storage and 6GB RAM, and 128 GB storage with 6 GB RAM. All the variants support microSD cards up to 256 GB.

The phone runs on MIUI 10 based on Android Pie (v9.0). The phone is ideal for gaming and multimedia as it has a powerful chipset along with Adreno 612 GPU. The phone easily handles the games like PUBG and Asphalt 9 where you can play in high graphics settings. It has good benchmark scores compared to Snapdragon 710 as you can see the look of better performance for this chipset in Redmi Note 7 Pro.

Talking about the camera capabilities of Redmi Note 7 Pro, the phone comes with a dual-camera setup. It has a 48-megapixel primary sensor with an f/1.79 aperture. With this, a 5-megapixel secondary depth sensor has been added for better portrait shots. The phone has camera features like AI scene detection, AI portrait mode, and night mode. While it comes to the picture quality, the phone shots amazing shots in well-lit settings. The 48MP images are pixel binned to 12MP phots that looks crisp and you won’t lose any details even after zooming multiple times.

Apart from this, the phone has a 13-megapixel selfie sensor. The front camera also takes great images but struggles in low-lighting conditions. With the rear camera of this phone, you can record 4K videos at 30fps. The phone also has an EIS(Electronic Image Stabilization) which makes videos steady and crisper.

The battery of the phone is 4,000 mAh and it will support Quick Charge 4.0. The battery on the phone is pretty large which should last you well over a day with ease. The phone’s capability of Quick Charge 4.0 is just great to refill it. You can get a 10-watt charger on the box which is not that impressive though. Although phones these days come with large batteries as Samsung has recently launched Galaxy M31, Galaxy M21 with 6000mAh battery, 4000mAh is still a pretty decent battery phone in 2020.

If you are looking for some refreshed or newer phones in this price range, Realme 6 Pro, newly launched Redmi Note 9 can be a great option.