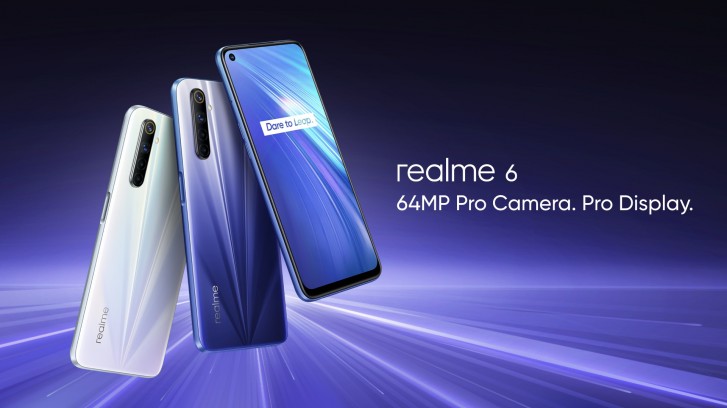 Realme started the year with some new models in the budget segment and an all-new 5G capable flagship. Now the company has launched the upgraded series of Realme 5 series, which includes Realme 6 and Realme 6 Pro. Realme 6 is the affordable phone of this series, which has a hole-punch display with a 90Hz refresh rate. This is Realme’s first budget device, using a high-refresh-rate display. Even at this price, mobile with a 90Hz display is not available in the market. The phone comes with a powerful MediaTek Helio G90T chipset, which has been seen earlier in the Redmi Note 8 Pro.

Instead of the Sunrise design offered on its low-cost models, Realme has come up with comet design on this phone. Realme 6 has a gradient finish at the back, in which the lines are seen when the lights are out. All these lines start from the top and gather like a nozzle at the charging port below. Overall, it gives the phone a premium look.

The highlight of the display is the included 90Hz refresh rate. A high-refresh-rate enhances your experience. The company has set this refresh rate to auto, which sets the phone itself between 60 Hz and 90 Hz, but if you want to set its refresh rate according to you, you also have that option available. The display has a density of 405 PPI and Realme 6’s screen-to-body ratio is 90.5 percent due to hole-punch. Gorilla Glass 3 has been given in the front for display protection, which is undoubtedly a little old technology.

Realme 6 has a 6.5-inch display, which is similar to Realme 5. However, the new phone does not have a notch. Instead, the company has added a hole punch design this time in fashion. It is on the left corner of the display. There are thin bezels on the side of the display, but the chin below is quite thick.

This time Realme has opted for a side-mounted fingerprint scanner in the budget phone, which is located on the right side of the device. Its easier to reach the power button/fingerprint sensor quite comfortably while holding the smartphone in the right hand. If you are accustomed to using the phone with the left hand, then you may have to register your left-hand finger and thumb to unlock the smartphone.

Talking about the software, Realme has given its Realme UI instead of ColorOS custom skin with some changes. The new Realme UI is based on Android 10. Our device was running on the February security patch.

The performance of Realme 6 is pretty outstanding as we never had to wait long for the apps to load. With 8 GB of RAM on the device, it does not let apps kill in the background and you can multitask easily in it. It also takes very little time to load the app. MediaTek has introduced the Helio G90 series as a gaming processor and we were curious to see how Realme 6 would perform in terms of gaming. We played PUBG Mobile on a smartphone and it defaulted to high-settings and high frame rates with graphics set to HD. We did not see any lag or frame drop while playing games like PUBG Mobile, Asphalt, and others in these settings. After about 20 minutes we notice that the smartphone gets a little hot on the touch.

The user interface gives a somewhat stock Android experience and we found it easy to use. The Settings app is well designed and we didn’t have to struggle to find an option. Realme UI also comes with features such as digital wellbeing, focus mode, dark mode, and riding mode. Realme 6 comes with dual-mode audio, which allows you to simultaneously connect a Bluetooth and wired headset for music on a smartphone.

Realme 6 has a 64-megapixel primary camera at the back along with three other cameras. The back camera setup includes an 8-megapixel wide-angle camera with a 119-degree field of view, a 2-megapixel monochrome camera, and a 2-megapixel macro lens. The front has a 16-megapixel selfie shooter. The camera software is largely like other mid-range smartphones. We had no problem switching to different shooting modes in the camera app. Quick toggles are provided for HDR, filters, and chroma boost. AI discovers the scene.

Realme 6 is quick to focus on and measures the light properly in most scenes. In broad daylight, the camera of the phone takes some good shots and even when zooming, there was no lack of detail in the photos. In Bright Scene, the HDR mode of Realme 6 is enabled by itself. Photos come at 16 megapixels by default, but you can take pictures by turning on the 64-megapixel mode if you wish.

There is also a wide-angle camera on Realme 6. However, compared to the primary camera, this camera is not as good in dynamic range. Photographs can capture a much larger area, but there is a lack of detail and quality in photos taken from it. Apart from this, the edges of the picture also get slightly distorted.

For close-up, Realme 6 also has a depth sensor, which blurs the background well. The camera sets focus quickly, due to which the photos are good. Portrait mode also gives you the option to set the level of blur before taking a shot. The camera accurately detects the edge of the subject.

Camera quality decreases slightly in low light. You will get some good looking pictures even in low light, but there is a lack of detail in the photos when zoomed. Night mode works much better in low light and gives a great output by combining multiple frames. The detail also appears in pictures taken with night mode.

The selfie shot with Realme 6 also had good details. However, beautification is enabled by default. For natural-looking output, you must reduce or turn off the beautification. These pictures were good for sharing on social media.

Recording at 4K resolution can be done from the primary camera and 1080 pixels from the selfie camera. Apart from this, the primary camera allows users to record 1080p with 60 frames per second. Videos are stable at 1080p resolution, but not at 4K. We also see mild flickering effects in videos taken in low light.

The battery life of Realme 6 is quite good as it packs 4300mAh battery. With our usage, Realme 6 lasted one and a half days on one charge. The box comes with a 30W fast charger. With this charger, the phone charges up to 65 percent in 30 minutes and takes more than an hour to fully charge.

Realme 6 has a side-mounted fingerprint scanner, which means that the fingerprint sensor is also set on its power button. It is capable of unlocking the phone with accuracy and speed and we liked its performance a lot. We also set up Face Recognition, which recognizes the face and unlocks the phone. This feature also unlocks the phone very fast. Unlocking the smartphone requires very little effort after enabling the wake-to-wake feature included in the phone.

In terms of connectivity, this phone offers Bluetooth 5, dual-band Wi-Fi AC and three navigation systems. It is a dual-SIM device that includes support for VoLTE with 4G. It includes all common sensors.

Realme 6 Price in Nepal and Availability

Realme Nepal has once again launched a great smartphone at a reasonable price. Realme 6 comes with a powerful processor, gives good battery life, and also comes with a 30W fast charger in the box. The company has also improved the Realme UI, but we want the company to reduce bloatware (unwanted apps) in the future. If you are looking for a value for money device priced at Rs 30,000 or around, then you can have a look at Xiaomi’s Redmi Note 9 Pro or Samsung Galaxy M21 and Samsung Galaxy M31 which is available in Nepal. However, we believe that you will also be satisfied with Realme 6.