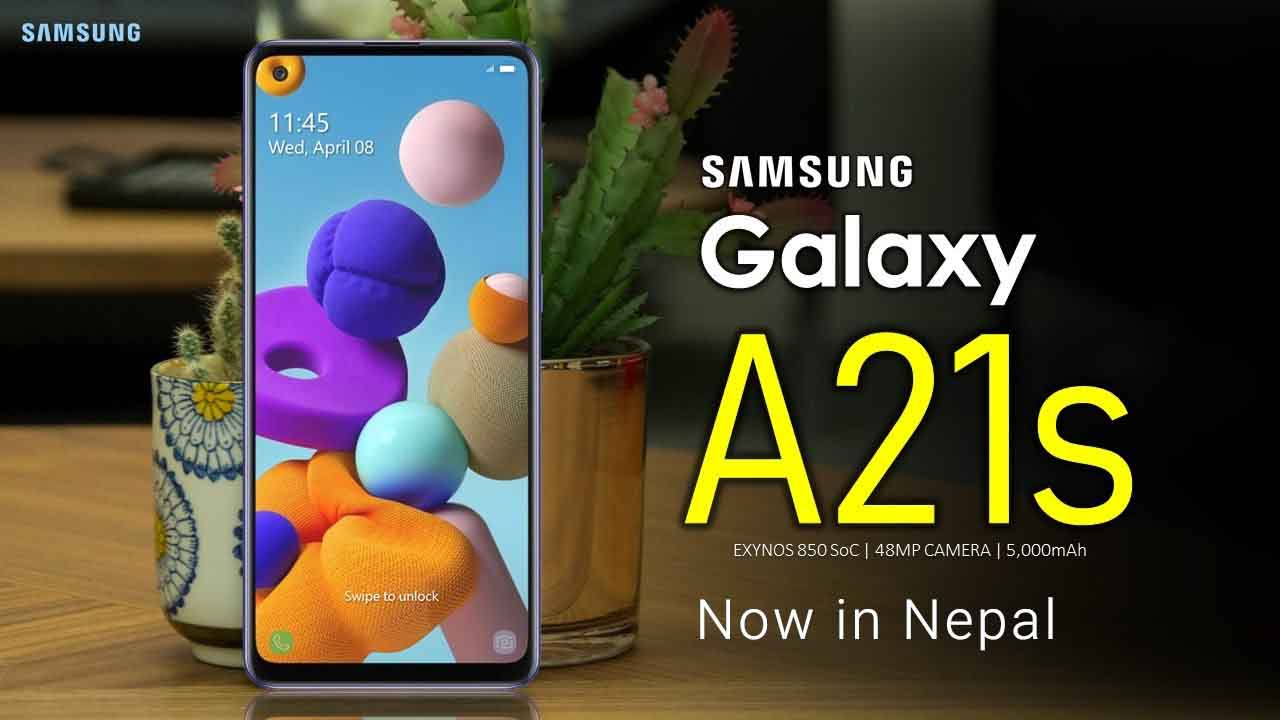 Samsung Nepal is launching a series of smartphones in Nepal after this lockdown. Samsung Nepal has already launched 5 new smartphones after the ease of lockdown by the government. They recently launched Galaxy M31, Galaxy M21, Galaxy S20 Ultra, Galaxy M11, and Galaxy A01 in the Nepal market. To keep the pace, Samsung has now launched the most-awaited Galaxy A21s at competitive pricing. Samsung’s Galaxy A series is one of the most popular mid-range series in Nepal and now A21s has made an entry to another mid-range king. The price of Galaxy A21s in Nepal is set at Rs. 24,999 for the only 4/64GB variant. For the latest information about the price of Samsung’s phone, don’t forget to check the latest price list of Samsung phones in Nepal.

Samsung Galaxy A21s is a trustworthy mid-range smartphone from Samsung that comes with the quad rear camera setup, 48-megapixel primary camera, and 5,000 mAh battery. The quad-camera setup on the phone has L shaped which is similar to the new phones of M and A series. The phone has an Infinity O-display, which has a selfie cutout on the left-hand edge of the screen. The Samsung Galaxy A21s was launched in the United Kingdom in March and now the phone is available in Nepal in July.

Following the footprints of other smartphones in the Galaxy A series, the A21s come with a plastic build to make the pricing more competitive. The handset looks beautiful with its glossy plastic body. There is an L shaped camera setup at the right corner at the back with a fingerprint sensor in the middle. The punch-hole display at the front looks beautiful giving a premium feel.

The Samsung Galaxy A21S handset has a 6.5-inch HD+ Infinity O display with a resolution of 720X1600 pixels. Following the trend of smartphones in 2020, it comes with a 20: 9 aspect ratio display. The display at the top houses a selfie camera on the hole punch and an earpiece at the front.

Under the hood, the A21s is powered by a 2.3GHz Exynos 850 octa-core chipset manufactured by Samsung. The chipset is one of the newest manufactured by the company that is based on the 10nm FinFet process. Although, the phone comes in three variants of RAM and storage - 32GB storage 3GB RAM, 64GB storage 4GB RAM, and 64GB storage 6GB RAM but only 4/64GB variant has launched in Nepal. Storage can be expanded through the microSD card up to 512 GB.

On the software department, the phone is based on One UI 2.0 on top of Android 10 which is the newest version of Android.

For the videos, you can shoot 4K resolution videos at 30fps and 1080p videos at 60fps. Additionally, the camera system of the phone has a super steady mode which will give you respectably smooth footage and EIS functionality.

Galaxy A21s flaunts sizeable 5,000 mAh battery which is almost similar to that of Redmi Note 9. The phone supports 15 W fast charging. It has a fingerprint sensor on the back and is equipped with facial recognition technology. The dimensions of the phone are 75.3 x 163.6 x 8.9 millimeters and weigh 191 grams.

Galaxy A21s was launched in the Indian market in April this year. The phone has finally made its way to Nepal. Galaxy A21s is launched in India at the price of INR. 16,999 for 4/64GB. Samsung Nepal has priced the phone in Nepal cheaper than in India and this is good news. The price of Galaxy A21s in Nepal is set at Rs. 24,999 for a 4/64GB model making it one of the best phones under Rs. 30,000 in Nepal.

A21s is a great offering from Samsung but there are great phone available in the market as an alternatvie for this phone. If you are looking for similar or better phones in this price range, recently launched Realme 6i, Xiaomi’s Redmi Note 8, Oppo A31, Redmi Note 8 Pro can be a good option.