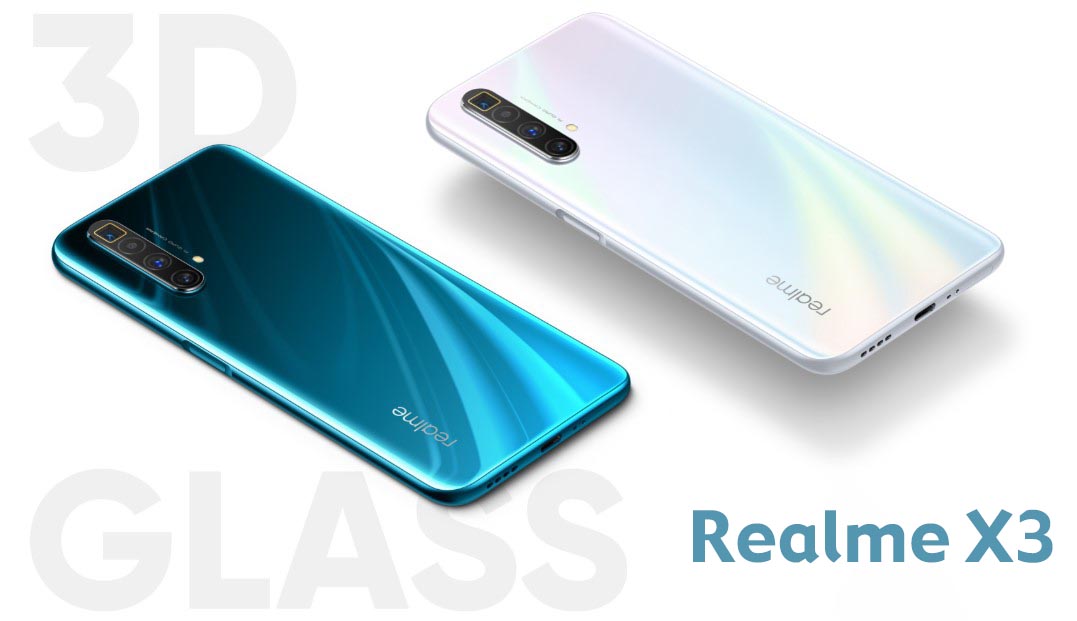 Realme X3 comes with a 120Hz display, quad rear camera, and dual selfie camera. The phone is powered by an octa-core Qualcomm Snapdragon 855+ chipset and includes a liquid cooling system with an eight-millimeter vapor tube. The phone comes with a Quad camera setup along with a telephoto lens that can support a 2x optical zoom where the 5x optical zoom support included in the Realme X3 SuperZoom.

While it comes to the design, the X3 looks almost similar to X3 SuperZoom. Talking about the build, the phone has a plastic build with a Gorilla Glass 5 protection at the front. It has a Quad camera array resting at the top left edge accompanying a fingerprint at the side as that of Realme 6 Pro.

Realme X2 comes with a 6.6-inch full-HD + display with 1080 X 2400 pixels resolution. It has an LCD panel that supports a 120Hz refresh rate which is very good for gaming and browsing.

The phone is powered by an octa-core Qualcomm Snapdragon 855+ chipset, coupled with an Adreno 640 GPU. Realme X3 includes LPDDR4X RAM with support of up to 8GB and UFS 3.0 storage up to 128GB. There is no option for expandable storage the phone is offered in two variants of RAM and storage - 6GB 128GB and 8GB 128GB. The phone runs on Android 10 with Realme UI on top.

The Realme X3 comes with a quad rear camera setup, which includes a 64MP shooter as a primary camera. There are an 8-megapixel ultra-wide-angle lens and a 2-megapixel macro shooter with a 64-megapixel Samsung GW1 primary sensor with f/1.8 aperture. The setup also has a 12-megapixel telephoto lens, which has an aperture f/2.5 and supports 2x optical zoom. X3 misses the periscopic zoom lens which is found on X3 Superzoom. Except for this, all other cameras are identical.

For the selfies and video calls, Realme X3 has an 8-megapixel ultra-wide-angle shooter and a 16-megapixel Sony IMX471 camera sensor with f/2.0 aperture. Camera-wise, the phone is almost comparable to Xiaomi’s Poco X2 which have the Quad camera at the rear and dual at the front.

Realme has added a battery of 4,200 mAh capacity in Realme X3, which supports 30W Dart Flash Charge. Apart from this, the dimensions of the phone are 163.8x75.8x8.9 millimeters and weighing 202 grams.

Connectivity options include 4G, Wi-Fi 802.11 AC, Bluetooth 5.0, GPS / A-GPS and USB Type-C port. The board includes an accelerometer, ambient light, gyroscope, magnetometer, and a proximity sensor. The phone also has a side-mounted fingerprint sensor. Additionally, it comes equipped with Dolby Atmos and high-res audio technology. Galaxy M31 which can be a good option anytime for 6000mAh battery lovers.

The phone will be available for purchase in India starting from June 30. The base variant of 6 GB + 128 GB storage is priced at Rs 24,999 and the 8 GB + 128 GB storage option is priced at Rs 25,999 in India. Realme X3 will be made available in two different color options, including Arctic White and Glacier Blue. While the availability of the phone in Nepal, we can’t be sure for now. The expected pricing of Realme X3 in Nepal is Rs. 44,999 for 6/128GB model and Rs 47,999 for 8/128GB model. Don’t forget to check out the latest price list of Realme phones in Nepal.

There are some other smartphones at similar prices that are about to launch and some are already available in the market. OnePlus launched OnePlus Nord soon with similar kind of specs. Xiaomi Nepal has recently launched Mi Note 10 Lite which is available in Nepal.