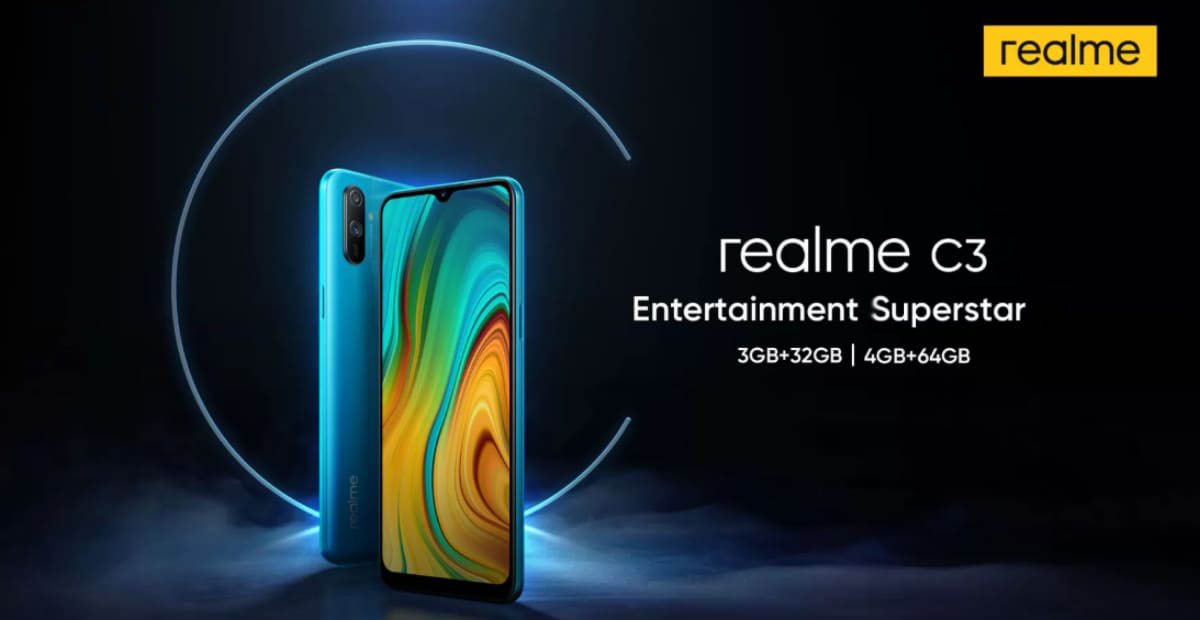 The most awaited competitor for the Redmi entry-level phones, Realme C3 has been launched in Nepal. The C3 comes with a dual-camera setup and a 5,000 mAh battery. The phone features waterdrop notch and a thin border at the bottom. The phone is launched at the price of INR 7999 and INR 8999 for 3/32GB and 4/64GB variants in India. As per the latest information, Realme Nepal has finally launched the phone in Nepal. For new only the base variant of the phone is made available. The price of Realme C3 in Nepal is Rs. 16,990 for 3/32 GB. Check out the latest Realme mobile price in Nepal .

Talking about other features, Realme C3 is equipped with MediaTek Helio G70 processor, 6.5-inch HD + display, and has an 89.8% screen to body ratio. Realme C3 will replace Realme C2 in the market. Let’s find out the details of Realme C3.

Realme C3 has a plastic body with a plastic frame. The phone looks almost similar to Redmi 8 with its huge display. There is a dual-camera setup at the back but the phone misses a fingerprint scanner.

It has a 6.5-inch HD display with a resolution of 720x1600 pixels. There is a tiny Waterdrop Notch at the top for the selfie camera. The smartphone will be equipped with 89.8% screen to body ratio and Corning Gorilla Glass 3 protection.

The Realme C3 is powered by a MediaTek Helio G70 processor which is coupled with either 3 or 4 GB of RAM. Realme’s latest Narzo 10A uses the same chipset which is an average performer. For the storage, there are two options of 32GB and 64GB with an additional option to use a microSD card and expand the storage up to 256 GB if needed. Realme C3 runs on Realme UI based on Android 10.

Realme C3 is a dual-camera smartphone. On the backside is a 12-megapixel primary camera with f/1.8 aperture and a 2-megapixel secondary camera with f/2.4 aperture. There are multiple features in the camera such as HDR, Nightscape, Croma Boost, Slow Mo, PDAF, Portrait Mode, and many other camera features are included.

For the selfies and video calls, there is a 5-megapixel camera on the front panel. It is equipped with features like HDR, AI beautification, panorama view, and time-lapse.

The battery of Reality C3 is 5,000 mAh which is really great for this price range. Xiaomi recently launched Redmi 9 also packs 5020 mAh battery which proves that phones in every price range are more focused on bigger battery these days. It claims to provide a talk time of up to 43.9 hours and a standby time of 727.7 hours. Samsung recently launched huge battery phones - Galaxy M21 and Galaxy M31 which is also more focused on big battery.

Nokia Nepal recently launched Nokia C2, a good entry-level phone that is priced under Rs. 10,000 which you might be interested in. Is Realme C3 the best phones under Rs. 20000 in Nepal ? What do you say? Comment down.